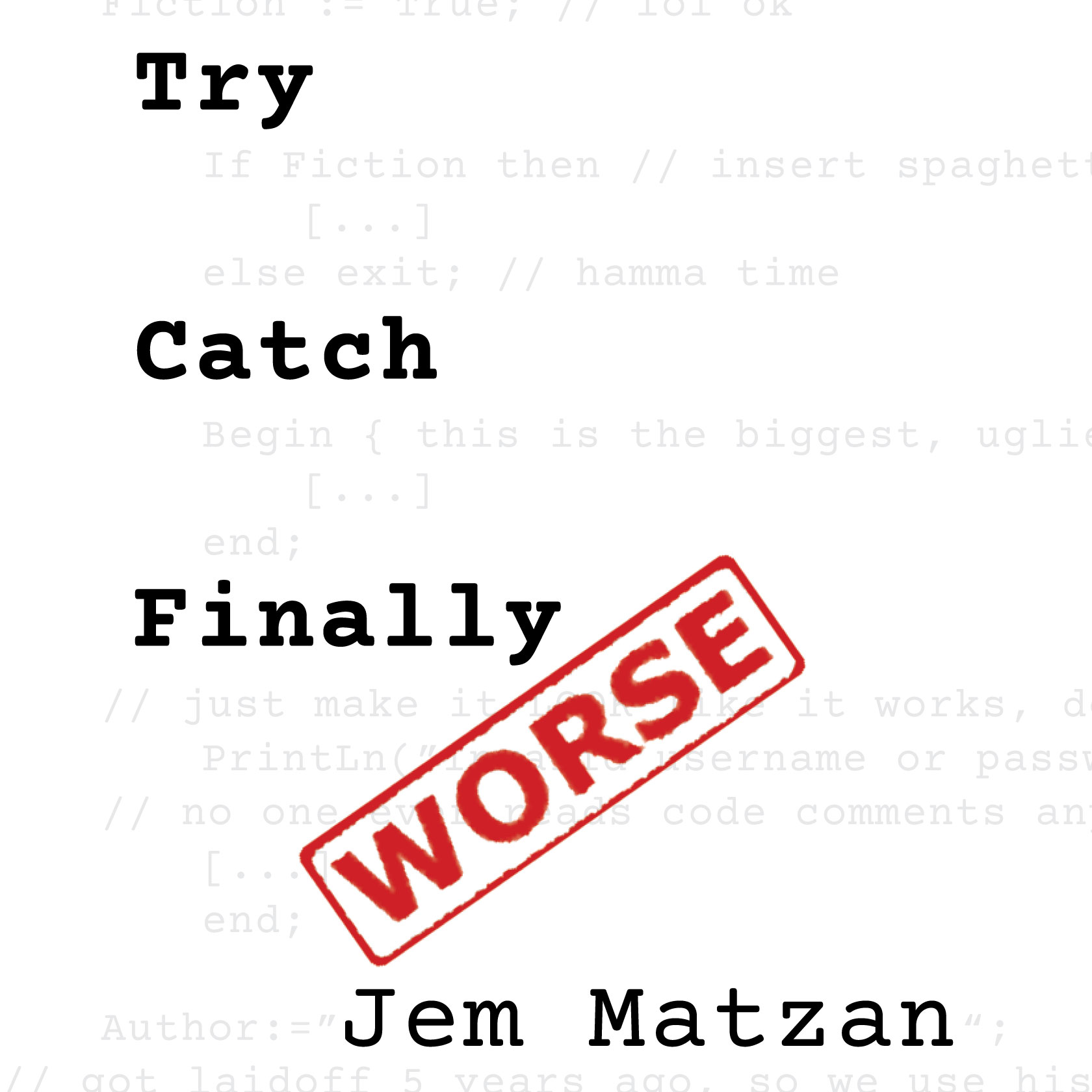 I've written a lot of stories. Most of them are no longer in print. That's not because some corporate publisher needed to increase its earnings per share; it's because I didn't want those books to represent my current style and level of ability.

Here's my best effort to recall every short story I wrote (most were never published):

The Screaming Frog (1987): A non-fiction account of catching a wild frog, and being shocked by its reaction. When asked to write a story for a 4th-grade school assignment, I decided to document something bizarre that happened to me the previous summer. I was 9 years old with nothing to do in the Adirondack wilderness. I didn't like fishing, but I did enjoy the challenge of catching frogs with a small fishing net, then releasing them. One of them screamed really loudly when I caught it -- I had no idea frogs could sound like that. My teacher nominated me to go to a creative writing workshop with a few students from other classrooms; we went to a retirement home and each read our stories out loud for a group of retirees, and then they read their stories to us.

Adirondack Ducks (1987): The overwhelming success of The Screaming Frog went straight to my head, and I wanted to keep the streak going, so I continued writing about animals. By this point I'd learned my lesson about trying to catch them, though, so this was sort of a long, low-drama essay on everything I knew about mallards. It was well-received in the local parent and teacher markets, but failed to achieve commercial success.

Sonny and Llib (1988-1991): There was no creative writing program in 5th grade or beyond, so I decided to write for fun. During this time I watched a lot of movies on VHS, read a lot of YA fiction, and played every PC game (King's Quest, Space Quest, Red Baron, etc.) I could find. From all of these sources of influence, I started writing fiction stories about two characters: the highly competent Sonny, and his moron sidekick Lib (originally it was Llib, which is Bill spelled backwards; this was a poorly-masked attempt to make fun of an obnoxious, funny-looking classmate named Billy). There were several stories in this series, all of them a mix of action and comedy in a setting inspired by a movie or book or game -- Sonny and Lib were police detectives, space explorers, elite commandos, or whatever else the context required.

Mysterious Island 2 (1989): We rented 20,000 Leagues Under the Sea on VHS, and then Mysterious Island, and I was blown away by the concept of a true sequel (not a series or trilogy): you could finish a story, then start another story later to continue it. I know that seems silly, but keep in mind I was 11 years old. Anyway, I flexed this new muscle by writing my own sequel to Mysterious Island. I can't remember what it was about, though.

The Eliminator (1990): An incredibly violent rewrite of Robocop.

The Dog-Catcher (1998): I stopped writing stories for a long time. When I picked it up again as an adult, I recounted a bizarre experience from my childhood. Several family dogs around the area had suddenly gone missing during a weekday. My dog was kind of an asshole; he would suddenly bite for no detectable reason, and occasionally he would come home with a dead chicken that he stole from a nearby farm. He wasn't fenced and was free to roam the rural/suburban world, so it wasn't a surprise that he would disappear, but the neighbor's dog was an expensive purebred Siberian Husky in a locked outdoor pen. Someone cut the lock and stole that dog, and a few more from other nearby houses. The neighbor somehow tracked down the thief, and when he went to the guy's farm to confront him, the thief pulled out a gun and threatened to kill him. The conclusion the adults drew at the time was that the guy was stealing dogs and selling them to some kind of research facility. I don't know if he was ever caught or arrested. When I was about 20, I decided to get back into the short story game, using this as inspiration. My version had a happier ending, though.

The Liberator (1998): Basically this was The Dog-Catcher told from the perspective of one of the dogs. It wasn't nearly as good because there was no mystery; it was a linear action plot.

Dream Within a Dream (2001): A man who works several odd jobs dreams that he's one of his wealthy clients. That discription makes this sound better than it actually is. I thought it was a clever idea at the time -- and that's the problem. Clever ideas for stories always suck because they end up being a vehicle for showing how clever you are.

Valour and Desire: (2001): A high-fantasy tale of two adventurers who fall into a supernatural trap from which only one can escape. Again, I've made it sound much better than it actually is; this story is action-movie melodramatic cheese, but it was useful to me as the basis for what would become The Hero.

The Impossible Dream (2001): Tortured by the end of an obsessive romantic relationship, a mildly successful rock musician self-destructively wanders around a city in the middle of the night, seeking answers from quirky strangers. This one isn't as bad as the others in the collection, but it's still mostly cheese -- a vehicle for what I thought were clever ideas. It has its moments, though. Just now as I skimmed it for the first time in 20 years, I found this little flake of literary gold: "Parents know better than to have a sense of humor. What is life to a father, if not a series of disappointments and serious glances?"

The Gunner's Dream (2001): A fictional narrative of actual events in the life of Werner Voss, a real World War I fighter pilot. WWI air warfare history was a hobby of mine for most of my teenage years. I read everything I could about the most successful flying aces, and Werner Voss was by far my favorite. At 19 years old, he scavenged a faster French engine from a wreck, installed it in his German triplane, then took it for a test flight where he ran into a whole fucking squadron of Allied fighters, which he decided to engage by himself without even wearing his flight cap. He beat the absolute hell out of them. The dogfight eventually ended when he stalled out -- either from engine damage, or because he miscalculated the fuel capacity of an unfamiliar engine -- and crashed into the ground -- by which time he'd put so many bullets into all 8 of the enemy planes that they never flew again. The title of this story is cheese -- I don't know why I thought that was a good title. "The Test Flight" would have been much better.

To Be Torn From the Stars (2001): Unquestionably the worst story I've ever written. It's formatted as a letter from a mentally-ill man to his friend. At the time I found it cathartic; now I find it pathetic. Catharsis is another thing that dooms a story -- like with cleverness, the story becomes a vehicle for it. At that age I still found it difficult to unwind complex emotions, so I wrote to express instead of to explore what I didn't understand. Art is often therapeutic, but if it doesn't resolve -- if it doesn't have answers for its own questions -- then it's just drivel.

The Retreat (2006): This was an entry for a 24-hour short story contest. The prompt was a family is staying in a remote cabin, and the father adjusts a short-wave radio until he gets a signal. In previous years the winning entries were all maudlin, saccharine crap like "a heartwarming tale of a girl and her puppy." I hate to do what everyone else is doing, and I hate "cute" stories because as a reader I feel like I'm being manipulated or pandered to, so I went in the opposite direction: the radio signal is a recording of a religious cult leader who convinces the man to murder his family while quoting the Bible. It didn't win.

Stagecraft (2009): This was an entry for a World of Warcraft short story contest sponsored by Blizzard Entertainment. It's about a stage actor from Stormwind who is hired to go to Theramore on an errand for a member of the King's court. The details of the errand are only revealed after he's boarded the ship to Kalimdor: he is to deliver gifts and an offer of courtship from King Varian Wrynn to Lady Jaina Proudmoore. When he arrives in Theramore, he's intercepted by a member of Stormwind Intelligence, who explains that he is being set-up to be the patsy in a high-level assassination plot orchestrated by a cabal of Stormwind nobles. If discovered, such a plot would destroy the alliance between Theramore and Stormwind, so the actor and the SI:7 agent must intercept the assassin without revealing the identity of his patrons. Obviously the only way to do that inside of 10,000 words is to stage a variety show in Jaina's honor. Yeah, it's not the greatest story idea ever, but I developed and wrote the entire thing in less than 24 hours, and it's still better than the plot of Warlords of Draenor. Anyway, it didn't win.

Tales From the Twentieth Century

This was a collection of five of the short stories listed above: Dream Within a Dream, Valour and Desire, The Impossible Dream, The Gunner's Dream, and To Be Torn From the Stars. The title is crap; at the time I thought it was clever, even though it didn't adequately match the content. I began to feel embarrassed about it fairly quickly after it was released. When the drunkenness of a clever idea wears off, you can finally see how ridiculous and dishonest it is. It's impossible to understand this until you let go of the vanity of the labels you cling to -- writer, author, published author, storyteller, artist, whatever-the-fuck. By using one of those labels as a container for your identity, you doom yourself to constantly prove your self-worth through the expression of cleverness and the obsession with being impressive. Anything written to prove or impress cannot be anything other than awful.

Regardless, I don't regret publishing this book at all, even if I'm glad it's out of print. I learned a lot about the value of cover design (the cover was awful), and some of the processes involved with self-publishing. At the time I felt like I needed to produce something to prove that I had ability and value. Lots of people talk about being a writer, but how many of them are actually completing projects and publishing things? Even if it ends up being bad, you still have to respect the effort.

The Search for the Emerald Blackbird (2003)