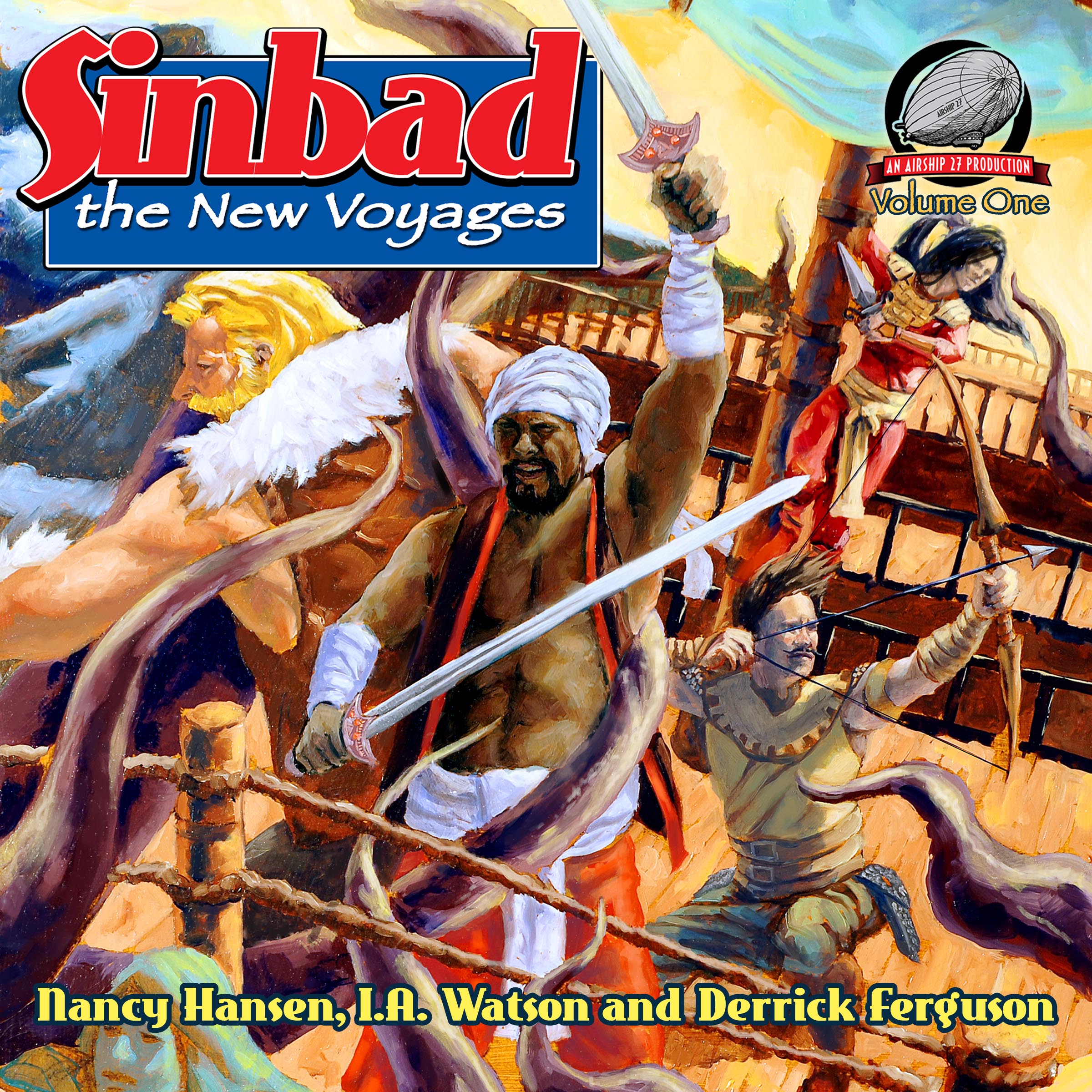 Sinbad: The New Voyages is a series of collections of short stories and novellas based on the ancient legend of Sinbad the Sailor. The exact origins of the stories of Sinbad's voyages is unclear, but Sinbad eventually made it into the 1001 Arabian Nights canon. Most people know Sinbad from the Ray Harryhausen stop-motion animation effects films of the mid-20th century, and some of the more modern remakes and reboots. Sinbad: The New Voyages Volume 1 contains three new original stories based on Sinbad and his crew of warriors and mystics.

These stories are marvelously suited to a dramatic audiobook reading. I really put the pedal to the floor on this one, and I'm already working on producing the next three volumes. The basic plot of all Sinbad stories (even the original ones) is this: Sinbad is either in need of more money or is given a quest from the Sultan to retrieve something mythologically significant. He gets his core crew together (described below) and takes on oarsmen and sailors to work his ship. Along the way, supernatural creatures attack, and Sinbad and his crew fight spectacular battles to survive and keep on sailing. There is often an arch-rival villain to face down or race against, as well. It's actually pretty similar to the formula for the Firefly TV series.

Sinbad is of mixed race, but described by the publisher as being physically modeled after actor Taye Diggs. Sinbad's voice, like all of the characters in the stories of Volume 1, is described both directly and indirectly, and I had no trouble developing it. I based it on the "heroic" voice I originally created for Captain Grant in The Hero, but added an extra bucket of boastful confidence.

Omar is short, stocky, ethnically Arabian, constantly urges caution and tries to avoid danger, and takes a gruff-and-tough attitude that balances out Sinbad's joviality. He's much too serious and stern to have a West Country "pirate" accent (and I wanted to save that one for actual pirate characters or rival sea captains), so I modified the deep, harsh, slightly gravelly voice that I originally developed for the Stonemason in The Hero.

Ralf Gunnarson is described as "a Viking" and has a booming voice and a personality that craves violence while having little tolerance for complexity. Unfortunately my voice isn't deep enough to do what I really wanted for Ralf, so I gave him a German accent and an action-minded inflection based on Arnold Schwarzenegger.

Tishimi Osara is a Japanese woman who is entirely dedicated to bushido. I tried doing a Japanese accent, but it just didn't sound right for her character. Tishimi is slow to speak and highly articulate and efficient with her words. So I gave her a low, evenly-measured whisper of a voice with a cadence and pacing that evokes the fast-and-powerful / slow-and-smooth dichotomy of traditional Okinawan and Japanese martial arts.

Henri Delacroix is a French archer and hunter who lives for drinking, storytelling, and the company of the nearest beautiful woman available to him. French is not my best accent, and doesn't always make for good audiobook voices because of the difference in how syllables are accented compared to English. I had to work harder than usual on Henri's dialogue to make it both fun and easily understood, and I really like how the finished product sounds.

Rafi is an old barber-surgeon and expert on mythology; the latter got me thinking of Denholm Elliott's character Marcus Brody in the Indiana Jones films (which, interestingly, were inspired by pulp fiction serial adventures like Sinbad The Sailor and Allan Quatermain). He's one of my favorite movie actors, and he could very easily have played Rafi in a film version of these stories, so I decided to aim for that. I spent quite a lot of time learning how to master both Denholm Elliott's accent and his unusual inflection and pitch variance. I will definitely use this character voice as a prototype to develop others from.

Bavathi The Exectutioner is described like a Michael Wincott villain, so that's the vocal style I aimed for. It was pretty rough on my throat, but Bavathi doesn't have a lot of dialogue. Most of the other secondary character voices are ones I developed for previous projects.

I developed some new and interesting effects for some of the supernatural characters: Djinn Lord, Djinn Priestess, Djinni Horde, and Goddess of Light. The Djinn characters are variations on multi-track or chorus effects with pitch changes and various levels of echo. The Goddess of Light uses a pitch change, a very unusual flange configuration, and a room full of reverb.

Sinbad: The New Voyages Volume 1 is a lot of fun to listen to, and if you're at all a fan of seafaring adventure, pulp fiction serials, or if you're interested in Arabian-themed stories that don't get political or lean heavily on religion, this is definitely for you. And if you like Volume 1, you'll soon have at least three more volumes to keep you going!